Life Starts When YOU Begin to Live 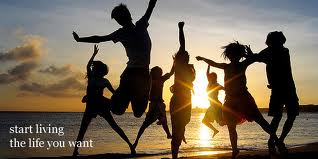 Three years ago on Thanksgiving morning, I received a chilling call that has changed the course of my life and my overall outlook…

On Wednesday, November 25, 2009, I went to bed with a smile upon my face because I realized that I was finally going to write the ‘book inside of me.’  I couldn’t wait to share this news with my parents, especially my dad who was always my biggest fan, the next morning because we were going to visit them for Thanksgiving.

On Thursday, November 26, 2009, I woke from a frightening dream at 4 am in the morning.  I can still remember it like it was yesterday…

In my dream, I was in a dismal cemetery.  It was drizzling, and my sisters and I were standing in a semi-circle starring down at a casket in a hole in the ground.  We were all dressed in black and I immediately assumed that it must be a sign that my mom was sick again, because she has battled cancer for many years.  In the next moment I looked up from the casket and standing directly across from me, also dressed in black, was my mom.  It was at that point in the dream that I realized that this was not about my mom, but rather my dad.  I then woke in a panic as my heart raced with fear.

Ironically, I turned to my left and noticed my 4 year old standing there starring at me.  I thought it was odd that he was there at 4 am, so I asked, “Nico, what’s wrong hunnie?”  He quickly responded with, “Mommy, I had a really bad dream.”  I gently hugged him and swaddled him into me and then asked him to tell me about his dream so that we could release it and go back to sleep like we normally do when he has a bad dream.  Unfortunately, he looked directly into my eyes and said, “Mama, I can’t tell you about this one.”  It was then that my fears were confirmed and I knew that this terrible dream was not only a dream but a sign that I needed to brace myself for.

Sure enough, at 7 am on that memorable Thanksgiving day, the phone call rolled in.  The call where I learned that my dad was admitted to the hospital the night before with an extremely high white cell count.

I went to my dad’s bedside and spent the next few days with him.  I talked to him, comforted him, did energy work on him, sang to him, and loved him.

The week-end prior to this nightmare, I was at a Hay House I Can Do It Conference in Tampa, FL having a revelation that there was a Hay House book in me. There were many inspiring instances that had occurred during these memorable days, but I distinctly remember a phrase by Dr. Wayne Dyer sticking in my mind…”Don’t Die With Your Music Left In You.”

I took this to mean something for my dad and so as I held him,  sang to him and supported him, I whispered that phrase into his ear, feeling like maybe he still had some music left in him…

Unfortunately, as I held my dad, a few moments after whispering that phrase and singing “Over the Rainbow” to him, I watched him take his last few breaths on this earth…It was Sunday, November 29, 2009 and my life was forever changed.

It took me several weeks to realize that that phrase that was stuck in my mind was NOT for my dad.  Instead, it was my dad’s way of continuing to inspire me.  Once I became aware of this I stopped saying, “Someday,” and I started living today, every day, in the moment.  You see, I suddenly realized that life is just too damn short to waste on fear and worry and I began to LIVE life instead of existing through life.  Within 6 months from that time, I published my first children’s book.  A book that had sat behind my desk for several years.  Now, almost 3 years later I am about to present a LIVE online event with Hay House…go figure!

This is all because I got a HUGE shock in my life and realized that life is here for us to LIVE and not to just exist through.

I believe that there are two forces that drive us in life…Love & fear.  Three years ago, I felt that I was being totally driven by fear and I knew something had to change.  For much of my life I was driven by fear.  Worry was never far behind me and I spent most of my days thinking ‘toxically’.

My Dad was an amazing man who always saw the sunshine in the darkness, but he too had a great deal of worry in his life, and that worry finally got to him in the form of cancer and took him before any of us had the chance to process what just happened.  Losing my dad made me see that I wanted to live life freely and let go of depression and that terrible feeling of unworthiness, so I made a vow to myself that 75-80% of the time I would only allow positive thoughts and I would become a positive person!

First, I broke this down by days of the week.  For example; Since there are 7 days in a week, I was only allowed to have 1 3/4 days that felt like ‘bad days’.  That still felt like too much, so I then broke it down to hours in a day.  I am awake approximately 15-16 hours a day, so 20-25% of that day is about 4 hours.  I therefore would only allow myself to be in a ‘bad mood’ for approximately 4 hours in a day.  That started to feel like too much too and I began to get very choosy about what I would let bother me and what I would worry about.

When the negative thoughts or feelings would creep in, I simply asked myself, “Is this worth my 20-25%?”  Prior to making this vow to myself, I would get upset about the smallest mishaps in life.  Maybe the traffic was too heavy or my favorite outfit wasn’t clean…that would send me into a tizzy!  I also was very hard on myself and never saw my own beautiful light.

Once I started this new practice, I suddenly had room to love myself, to listen to the voice within and above all to LIVE life to the fullest!

Lots of LOVE and tons of LIGHT,

Sign up for my free LIVE online event happening on June 26th by clicking this link… Ignite the Light: Creating Strong Foundations for Children & Adults